A few months ago, I published a book called, The Attractive Trap: Freeing Yourself from an Unhealthy Relationship. I was called to write this book because I know there are women caught in a variety of traps in relationships. How do I know this? I lived in The Trap for 23 years. I almost got caught a second time. I’m not alone. Once I broke my silence, I heard countless stories from women who shared the traps of current and past relationships.

This wasn’t an easy choice for me. It’s shameful. It’s embarrassing. Yet, after wrestling with this calling, I had to open the box.
There are many books about physical abuse, but few about the traps of emotional, mental and even spiritual abuse. The signs are hard to recognize at first, and once we do, it’s even more difficult to talk about the experience.

It’s become apparent to me in marketing the book that people are simply uncomfortable speaking out about this epidemic that affects one in four women.

Interestingly, I have 421 personal Facebook friends. Recently, I posted a photo of the fried hushpuppies my family and I devoured during a visit to my hometown. Within hours, it received 40 “Likes.” Contrast that to a July 4th post in which I placed a whimsical and patriotic picture of a bike on The Attractive Trap Facebook page to represent freedom. To generate discussion, I asked the question, “What does freedom mean to you?” Maybe freedom is such a lost concept we don’t even know how to answer. Maybe the 2,359 people it reached were busy eating hotdogs and watermelon. Maybe, just maybe, they were too ashamed to admit they don’t have personal freedom. Only two brave souls were willing to share their descriptions of freedom.

A month before, I posed a more serious and riveting question, “What would you do if you knew one of your loved ones was in an abusive relationship?” I received one “like” (and that was from my devoted husband). No responses. God help us. I hope this isn’t reflective of how we would show up for the people we love. If so, God help them.

It’s been perhaps even more telling to experience what my friends have said and not said. Some are elated. Some are dead silent. One questioned why I would broach this and not leave it in the past.

We’ve got to get over our shame if we are going to face this issue head on. Maybe you’re not in The Trap. I pray you aren’t. However, I can guarantee you know someone who is. It’s your sister or your neighbor or your co-worker or your best friend. What are you going to do about it? 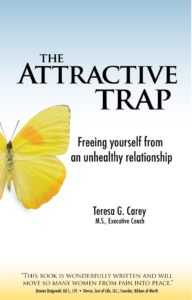